The Monferrato of Asti 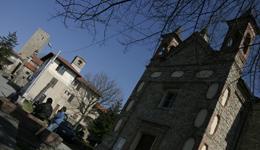 The Monferrato of Asti

The vineyards of the Monferrato of Asti wind their way between the river Tanaro and the high hills of the Moscato. This is a very warm area with low, broad and gently sloping hills generally between 100 and 300 metres above sea level. Excellent conditions for growing Barbera.

At Bubbio one can admire the medieval castle that once belonged to the great feudal lord Bonifacio del Vasto. In the nearby Monastero Bormida the great writer, professor of Cesare Pavese and nineteenth century man of letters, Augusto Monti was born. The tall medieval defensive tower of Saint Giorgio Scarampi surmounts the area at 700 metres above sea level.
Here one is in the production zone of the renowned Robiola Roccaverano cheese.

Returning to the heart of the classic production area of the Barbera d’Asti (Barbera the wine is always declined in the feminine for the Piedmontese), one descends to Nizza Monferrato. In the centre of Piazza Garibaldi one can visit the Foro Boario (the old cattle market). In via Pio Corsi one can find Palazzo Crova, a noble residence of the XVIII century, today housing the communal library, the music school and the Enoteca Regionale “La Signora in Rosso”.

Moving on one reaches Rocchetta Tanaro, the home of the marchesi d’Incisa an important family. Leopold Incisa experimented with numerous grape varieties form Italy and abroad and founded the first ampelographic collection in Piedmont.

Agliano Terme is renowned for its Thermal Spas with water that is rich in sulphur and magnesium emerging from the springs of San Rocco and Fons Salutis. The town is also seat of an important Hotel Management School.

At Costigliole d’Asti one can admire the imposing quadrangular castle with its circular towers at each corner and two towers guarding the draw bridge. Erected between the XIV and XV centuries it has over the course of time been altered and redecorated with baroque and mock gothic features being added. The castle hosts an international cooking school.
Not far in the suburb of Bricco Lu one can enjoy a splendid 360º view on the Monferrato hills. 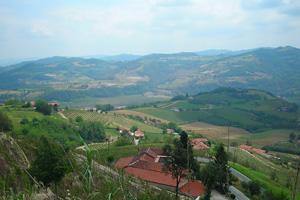