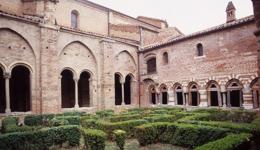 The Low Monferrato is the final fringe of the province of Asti on the borders with the province of Turin. This is the home of choice of such native varietals as Freisa, Bonarda and Grignolino as well as the aromatic Malvasia, from which an intensely perfumed and slightly sparkling red wine is obtained.

Castelnuovo Don Bosco is the birthplace of Saint John Bosco, the founder of the Salesian order and the Congregation of the Sons of Mary. In the suburb of Becchi one can visit the house in which he was born in 1815. Not far on a hilltop rises the “Santuario”, a famous complex of monuments dedicated to Don Bosco in 1961. These include schools, colleges and the Missionary Ethnological museum.

Castelnuovo is known as the “land of saints and wines” and perfectly sums up the local cultural tradition. In fact in the 1800s Castelnuovo saw the birth of numerous other saints: Saint Giuseppe Cafasso, Giuseppe Allamano, Giovanni Cagliero; as well as hosting during the course of their lives: Saint Domenico Savio, Saint Maria Mazzarello, Saints Benedetto Cottolengo, Guglielmo Massaia, Luigi Orione e Margherita Occhiena.

In the commune of Albugnano one can admire the Abbey of Santa Maria di Vezzolano. This is the most famous Romanesque monument in the province of Asti. It is a masterpiece erected in the eleventh century with a splendid façade in terracotta bricks and sandstone and a cloister enriched by capitals and frescoes for the 1200-1300s.

Castell’Alfero is the birthplace of Giovan Battista De Rolandis, the gentleman who had the idea for the Italian tri-coloured flag.
In 1808 the “Gianduia,” the carnival “mask” that is the symbol of Piedmont, was created here. The must sees of this township include: the seventeenth century castle of the counts Amico, the church of Saints Peter and Paul, the twelfth century Romanesque church of the Madonna of the Snow and the “Ciabot d’ Gianduia” (Gianduia’s toolshed).

Moncucco Torinese is seat of a castle and towers that house a plaster museum, the castle was erected in the XIV century and has seen substantial modifications over the centuries. 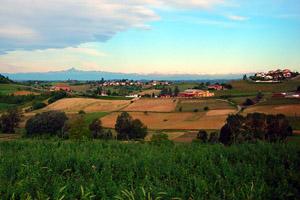