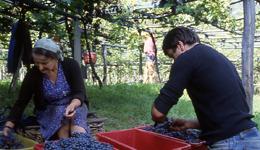 The Canavese is a district to the north east of Turin. The area is rich in waterways, parks, archeological and cultural itineraries. The name “Canavese” takes its origin from the ancient city of ‘Canava’ on the river Orco.

This is the gateway to the Valle d’Aosta, the mountainous region that borders Piedmont, and it is not far to the Gran Paradiso National park, a renowned tourist destination.

In this district the growing of grapes has very ancient origins, well before the Roman period. The method of cultivation that developed here is known as the “double pergola” supported by characteristic “topion”, conical stone columns, that keep in the warmth of the day to mitigate the cold of the nights which due to the almost alpine location, are particularly chilly.

Ivrea is the “capital” of the Canavese and has Roman origins as can be gathered by the name of its inhabitants – the “Eporediesi”. The modern city is built in the plain, occupying both banks of the river Dora Baltea. The historic centre, on the other hand, climbs the hill which leads to the cathedral at 267 metres above sea level and to the “Castle of the four towers”, symbol of the city, which since the end of the XVII century has been used as a jail.

In prehistoric times this natural amphitheatre was once an immense lake formed by the melting of the glaciers that passed through here. This explains the presence of numerous small lakes scattered in the surrounds. The “Naviglio di Ivrea” is a navigable canal created, thanks to Jolanda of Savoy in 1468, to irrigate the rice paddies of the province of Vercelli.

The Serra is the longest hill made of glacial moraine in Europe. It acts as an amphitheatre for the city and is full of cycle trails. On the western most end is Piverone, which face lake Viverone on whose banks there are numerous archeological sites. This lake, situated between the provinces of Biella, Vercelli and Torino, is an important destination for excursions and passing by is obligatory on the way over the Alps. On the southern side of the Moraine is the town of Caluso, seat of the Enoteca Regionale della Serra.

Lake Candia Canavese is the home of a rowing club whereas Agliè (the name Alladium derives from an ancient Roman city) hosts an important ducal castle dating from the XII century which in the 1600s was restructured, thus becoming a prestigious example of baroque architecture and the royal Savoy family’s summer residence. The castle features both English and formal Italian style gardens. 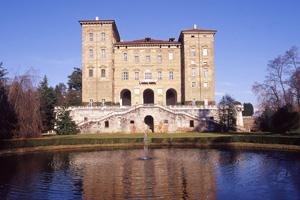