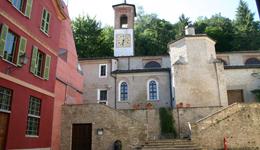 Moscato Bianco is the second most cultivated variety in the region with some 53 communes spread out in the provinces of Cuneo, Asti and Alessandria growing this variety on approximately 10,000 hectares of vineyard.
The characteristic countryside testifies the area’s vocation to this varietal with terraced slopes and dry stone walls following the contour lines of the hill sides for miles on end.

The Langa of the Cesare Pavese itinerary starts from Santo Stefano Belbo, where the author was born. All around one can breathe in the atmosphere that permeates his novels and the places he describes such as: the hill of Gaminella and the steepness of Moncucco; the market square on Wednesday; with the Hotel dell’Angelo, and then the farm house la Mora, the hill slope il Salto, and the cottage il Nido.

A worthwhile visit is the “Cesare Pavese” Foundation with its library and its ancient church of Saints Giacomo and Cristoforo now deconsecrated , as well as the house of his birthplace, and the “Nuto” museum, dedicated to Nuto, the friend of the main character in Pavese’s last novel “La Luna e i Falò”.

Following the fast flowing Belbo torrent one arrives at Cossano where the churches of Saint Elena and Saint Bovo can be found. The latter is in a suburb of Cossano called Castino where the “Pavaglione”, the farm house of “La Malora” (great masterpiece by Beppe Fenoglio) is also located.

Immersed in the places made famous by Fenoglio, the itinerary rises to the town of Mango which was a centre of partisan resistance during the second world war. Today one can admire the massive Busca Castle which now houses the Enoteca Regionale del Moscato.
In the main square there is a statue by Paolo Spinoglio dedicated to the dog, man’s best friend and great finder of truffles (the “tabui” is the name in the local dialect to describe the mongrel cross that is ideal for truffle hunting).

The route descends passing the suburb of Valdivilla, where in the ex Convent of Saint Maurizio there is now a five star Relais complete with restaurant, and arrives at Castiglione Tinella. The township was made famous by the countess Virginia Oldoini known as the countess of Castiglione. This fascinating woman was sent by count Cavour on a diplomatic mission to the court of Napoleon III to advance the Italian cause during the period of Italian unification.

The last stop of this itinerary on the hills of the Moscato is Canelli, which has been nominated for the UNESCO heritage site list for its underground cathedrals. These are a network of galleries excavated in the tufo rock where sparkling wines are still matured. 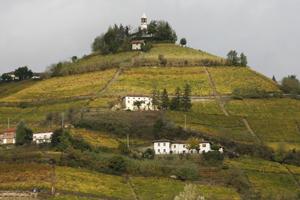