The Langa of Barolo 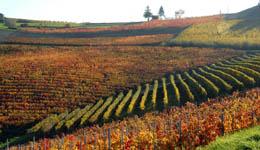 The Langa of Barolo

This is one of the most renowned of Piedmont’s tourist attractions. The area is a vast 360° vineyard, dotted here and there with castles and medieval hamlets. It is here that the Nebbiolo grape variety finds its ideal habitat and gives its best expressions.
The Barolo appellation consists of 11 communes covering a total of over 1,800 hectares of vineyard. Only after 3 years of maturation can the wine be called Barolo DOCG.

Verduno can be admired in its Piazza Castello (Castle Square), a manor house built in the 1700s in the style of Juvarra (a famous architect of the Baroque period). In 1838 King Carlo Alberto of Savoy transformed it into one of the royal family’s favourite residences. The story goes, that it was right here that the modern version of Barolo was born, thanks to the consultancy of House of Savoy’s oenologist, General Staglieno.

La Morra sits atop of one of the highest hills of the right bank of the River Tanaro. From the “Belvedere” the most panoramic corner of Piazza Castello (where unfortunately no trace of the original castle remains), one can admire the “Vignaiolo” a bronze statue dedicated to the workers of the vine.
On the plateau where the rivers Tanaro and Stura meet is Cherasco, a township founded in 1243. A must see here is Luchino Visconti’s castle, built in 1348. Another symbol of the town is Palazzo Salmatoris, edified in the 1600’s, which regularly houses exhibitions of famous artists. The International Institute of Heliciculture (Snail Farming) has been based here for over 25 years promoting the study, technique and commercialization of the biological rearing of snails.

After a short drive, one arrives at the township of Barolo, home of the famous wine with which it shares the name.
Barolo sits in a natural amphitheatre as its original Celtic name of “Bas reul” would indicate. The main attraction here is the Falletti Castle which, since 1982, houses the Enoteca Regionale del Barolo as well as an ethnographic and oenological museum.

Along the route to Novello is Castello della Volta, immersed amongst the vines of Nebbiolo, a hamlet full of traces of its medieval past.
Another ancient township, dominated by its massive rectangular fortress is Castiglione Falletto. Over the centuries the castle has belonged to various powerful local families. Heading towards Monforte d’Alba, the village of the Cathars (a heretic sect which in the eleventh century were deported and burnt at the stake in Milan). Here one can sojourn and listen to a jazz concert at the auditorium dedicated to the pianist Horszowski.
Whereas at Serralunga d’Alba one can admire the majestic military fortress which, as the story goes, was the birthplace of Barolo Chinato (a tonic drink made from Barolo wine with the infusion of herbs, spices and quinine). The castle has one of the most original designs in Northern Italy with a tall slender form and asymmetric towers, one square, one round and one hanging.

Rising the hilly slopes one reaches Diano d’Alba, home of Dolcetto and of breathtaking taking views of the Langhe hills.

At Roddi another imposing castle, fascinating testimony to the medieval past, greets the traveler. The town of Grinzane Cavour’s name pays homage to the famous statesman Camillo Benso, count of Cavour, who was mayor and lived in the imposing medieval manor. The castle of Grinzane is today the seat of the Enoteca Regionale del Piemonte and hosts the world white truffle auction. 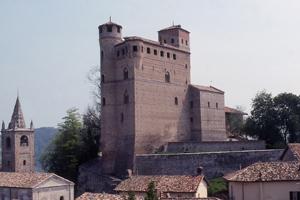